The Ultimate Guide to CBG: Benefits and Uses 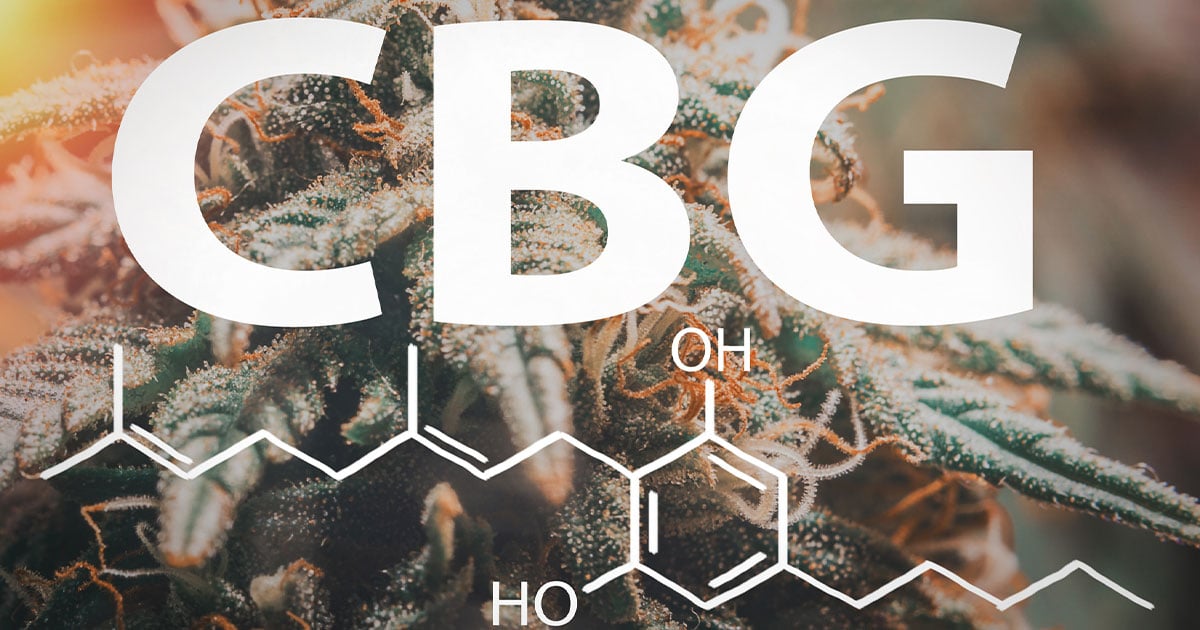 After the massive popularity of cannabidiol (CBD) among mainstream consumers, cannabigerol (CBG) presents itself as a worthy alternative, or better yet, supplement to CBD- and THC-based products for medicinal and recreational use.

As a non-intoxicating cannabinoid, cannabigerol is seeing increased attention from researchers, producers, and consumers. In light of the spotlight it is under, our comprehensive cannabigerol guide answers all your questions about this new cannabinoid on the block.

What Is Cannabigerol (CBG)? 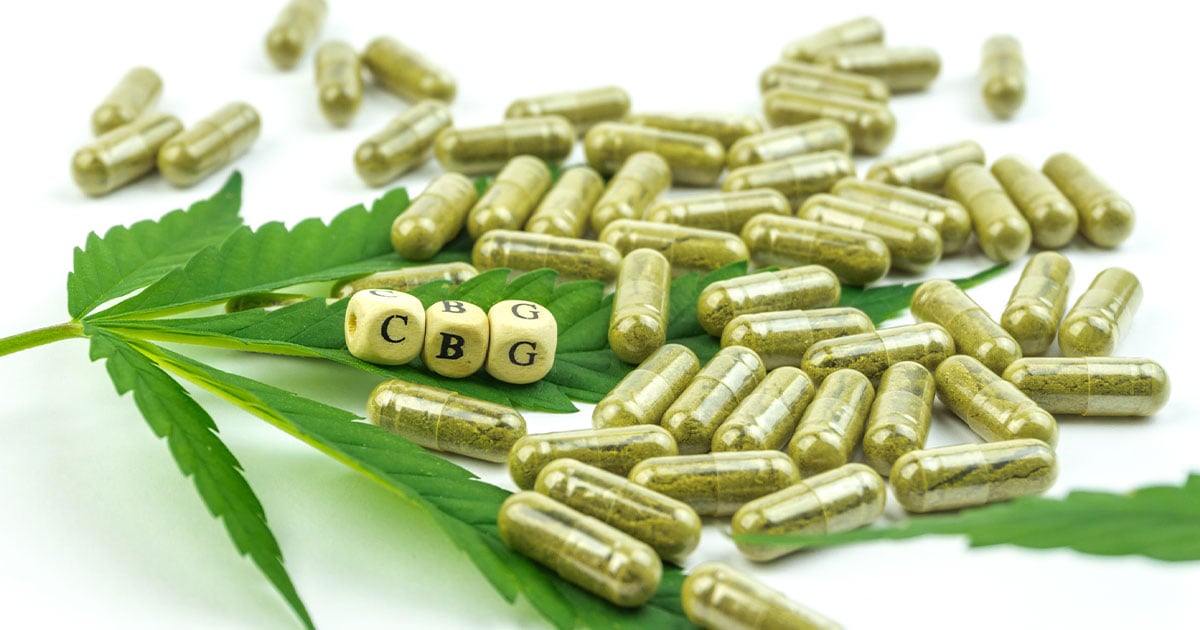 First discovered in 1964, cannabigerol (CBG), known as the “mother of all cannabinoids, is an incredible compound with tons of therapeutic potential. It is just one of over 100 cannabinoids found in cannabis. Its acidic form, cannabigerolic acid (CBGA), is the foundation of many other major and minor cannabinoids.

CBGA is the acidic chemical precursor of three primary compounds:

As the cannabis plant matures, a group of enzymes break down CBGA to produce these three main cannabinoids. By the end of the harvest, most of the CBGA has fully converted into THCA, CBDA, and CBCA. Any leftover CBGA can become decarboxylated and turn into CBG. Cannabigerol has a boiling point of 125.6º F (52º C).

Because it is found in very low concentrations in most cannabis plants, CBG-based natural products are not commonly sold compared to THC and CBD products. However, as interest in this remarkable cannabinoid grows, research is ramping up into its therapeutic effects.

Cannabigerol, in particular, binds to both receptors and amplifies the effects of anandamide, a neurotransmitter known as the “bliss molecule,” which is responsible for affecting motivation, appetite, sleep, pleasure, and pain.

CBG is a CB1 receptor agonist, meaning it interacts with the receptor and causes an increase in anandamide (AEA) levels in the nervous system. CBG can also interact with CB2 receptors in the gastrointestinal and immune system. Research is not clear whether it is a CB2 antagonist or agonist.

Research has shown that CBGA can influence 5HT1A-receptors. This receptor is responsible for regulating serotonin levels. CBG can be a moderate block of the receptor, which can affect the serotonin signaling in the central nervous system.

CBG has the following therapeutic benefits without the psychoactive effects of THC. 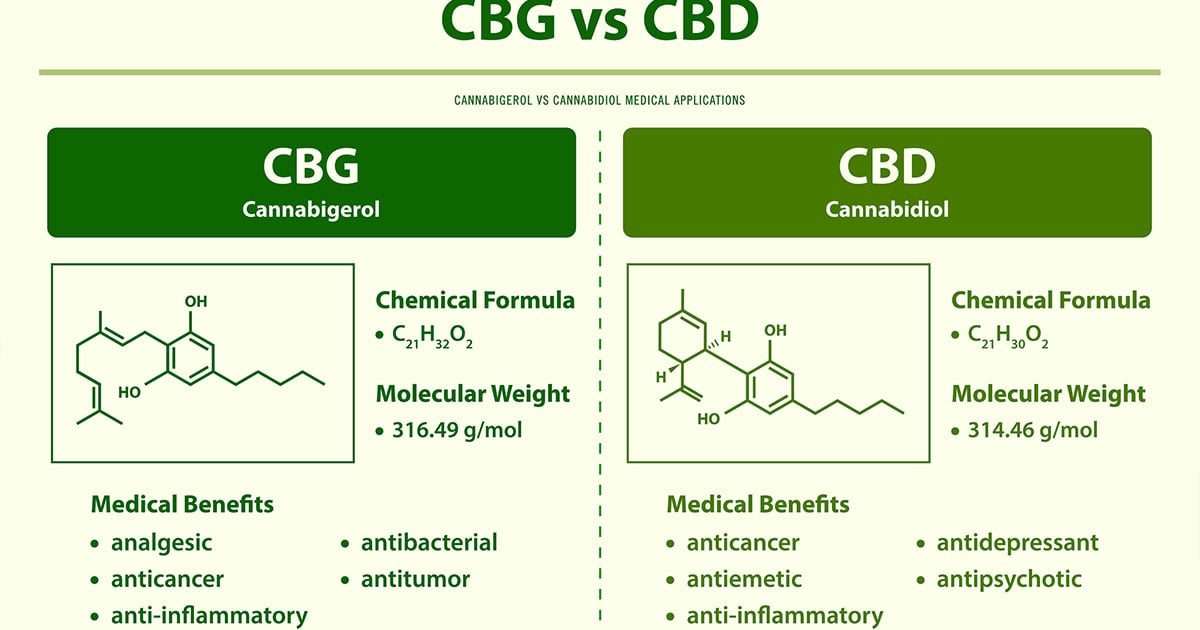 Many new users may confuse CBD and CBG. CBG shares many of CBD’s medicinal properties. Both CBG and CBD have enormous potential to treat a variety of conditions and symptoms without getting you high. Unlike THC, CBG and CBD do not have intoxicating effects. They may also reduce the negative side effects of THC.

CBD and CBG differ in concentration. In the early growth stages, CBGA will be the main cannabinoid present, but gradually converts to CBDA, THCA, and CBCA. CBD-rich flower buds can have up to 25% CBD, while CBG levels tend to stay below 1%.

Cannabigerol has proven to be a worthy complementary cannabinoid to the non-intoxicating cannabidiol. Early studies into this cannabinoid are very promising but there is still more need for human, peer-reviewed studies to show its effectiveness. Future research can begin to uncover the true potential of the compound.

Inflammatory bowel disease (IBD) involves chronic inflammation of the digestive tract and includes ulcerative colitis and Crohn's disease. A 2013 study on animals found that CBG was able to reduce inflammation and nitric oxide production in the colons of mice. It also reduced the production of reactive oxygen species (ROS) in the intestines.

A 2020 study discovered that CBG has strong antibacterial properties. In particular, CBG was effective against methicillin-resistant staphylococcus aureus (MRSA) strains. MRSA is known for causing drug-resistant staph infections that are difficult to treat.

Huntington disease is a rare and inherited condition that results in the destruction of nerve cells in the brain. In a 2015 study, researchers tested the effects of CBG and other cannabinoids in mice with an experimental model of Huntington's disease.

In the study, CBG functioned as a neuroprotective compound by protecting the nerve cells in the brain from damage. In addition to its neuroprotective effects, it also improved motor deficits and protected striatal neurons against 3-nitropropionic acid toxicity.

A 2016 study on rats found that CBG had appetite stimulating effects. Rats that were dosed with CBG were able to eat twice the amount of food compared to the control group. Appetite stimulation can be helpful for chemo-induced appetite loss and appetite issues in HIV patients.

A 2015 study tested the effects of many cannabinoids on bladder contractions. Researchers found out of all the cannabinoids, CBG was the best at treating bladder dysfunctions, followed by THCV, CBD, and CBDV.

Nowadays, you can get more than THC- and CBD-rich flower buds. While not as common as THC buds, CBG strains are becoming more widely available at dispensaries. Hemp has higher concentrations of CBG than high-THC cannabis strains.

How to Use CBG 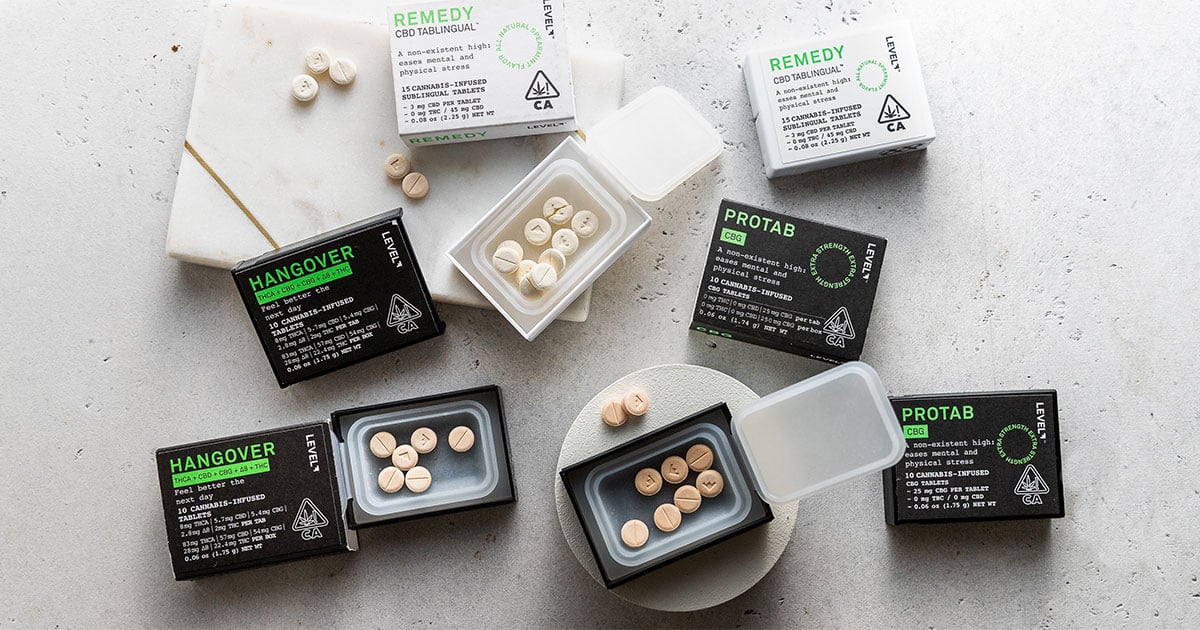 CBG products are becoming more prevalent than ever, especially in oil form. Still, CBG oils are relatively expensive and rare compared to other cannabinoid oils.

If you want to have the benefits of every cannabinoid and terpene found in cannabis plants, go for full-spectrum or broad-spectrum products.

The synergistic interaction between cannabinoids that works to amplify the positive benefits of cannabis while minimizing the adverse side effects is known as the entourage effect.

After the 2018 Farm Bill passed, hemp production became legal, which includes production of hemp derivatives such as cannabigerol. However, the plant and its derivative products must contain less than 0.3% THC.

Since CBGA is the first cannabinoid to develop in young cannabis plants, growers must take advantage of the short time window to harvest hemp plants. Ideally, growers will wait to harvest six weeks into the eight week flowering cycle. CBGA levels will be the highest before it converts into a variety of other cannabinoids.

Because cannabigerol is a minor cannabinoid found in trace amounts in harvested cannabis, CBGA levels will be frustratingly low, even if you harvest at peak cannabigerol concentrations. To make matters worse, harvesting early also reduces the total cannabinoids by weight compared to harvesting mature cannabis plants.

Essentially, a higher volume of biomass will be needed to produce enough cannabigerol for commercial production. The difficulty in producing cannabigerol-based products puts its products at a higher price point compared to other cannabinoid-based products.

In an attempt to obtain higher yields, breeders have embraced genetic manipulation and crossbreeding to develop cannabis strains that have higher concentrations of this cannabinoid. This is making extraction more cost-efficient for producers and consumers alike. Right now, some hemp can contain well over 90% CBG. Researchers believe that a malfunctioning gene prevents the conversion from CBG to THC, which produces higher concentrations.

Beyond CBD and THC: How Other Cannabinoids Can Help

As well known cannabinoids, CBD and THC have earned their place among common alternative treatment methods that have minimal side effects. As research continues to uncover the medicinal benefits of minor compounds in the plant, producers can create more effective products that can elevate the plant’s healing power.