Live resin vs. cured resin: What is the difference? Cannabis concentrates come in a wide range of consistencies, colors, and chemical profiles. It can be hard to distinguish between the wide variety of cannabis concentrate products as a first-time user.

Whether you are interested in making or consuming live and/or cured resin, our complete marijuana resin guide answers your frequently asked questions about the most popular cannabis concentrates on the market.

What Are Concentrates From the Cannabis Plant? 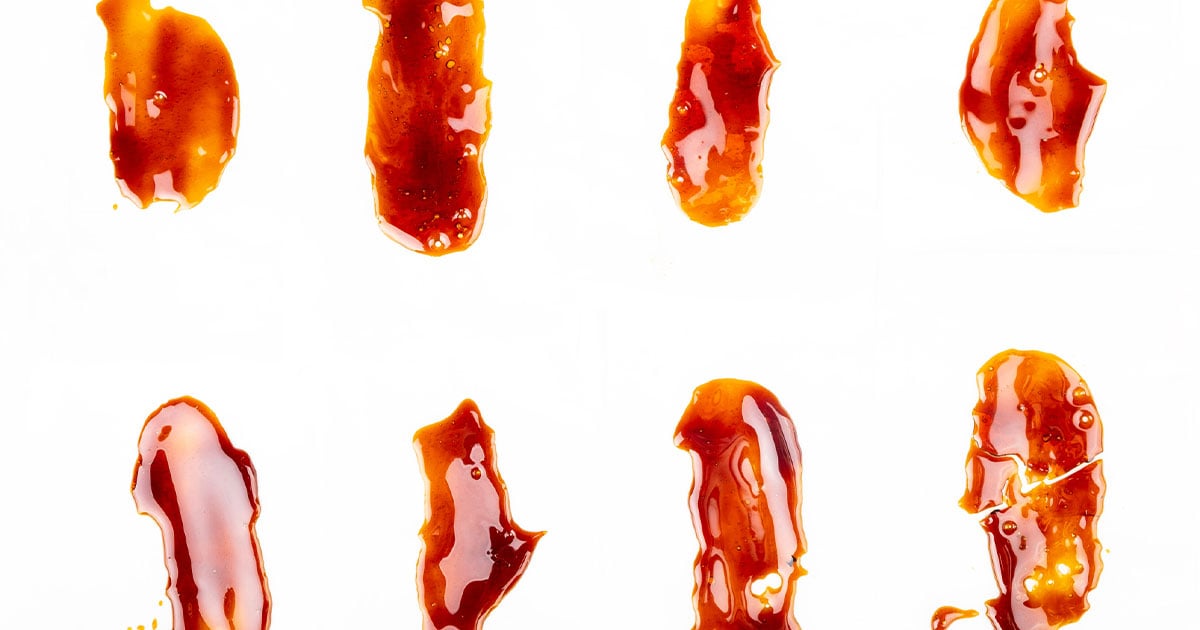 Cannabis concentrates contain a concentrated amount of cannabinoids and terpenes in varying levels, depending on the strain’s genetics and cultivation practices. Concentrates are made from plant starting material and processed using solvent-based or solventless methods, which strip the cannabis plant’s compounds (cannabinoids and terpenes) to be used in extracts, topicals, edibles, tinctures, capsules, and more.

What Is Cannabis Resin?

Cannabis resin refers to the cannabis plant’s trichomes, the resinous outgrowths found primarily on cannabis flower buds and in sugar leaves and stems in lower amounts. Trichomes produce the plant’s active ingredients, such as its primary cannabinoids, THC and CBD, and minor cannabinoids such as CBN, CBG, and CBC. Trichomes also produce terpenes, the compounds responsible for the plant’s flavor and aroma.

Cannabis flower buds are usually harvested when the trichomes reach peak maturity. Trichomes begin as clear glands and gradually turn white and then amber as they mature. When most trichomes have reached their amber color, most farmers start to harvest. Harvesting during the right time window ensures the buds have the most amount of cannabinoids and terpenes.

What Is Cured Resin? 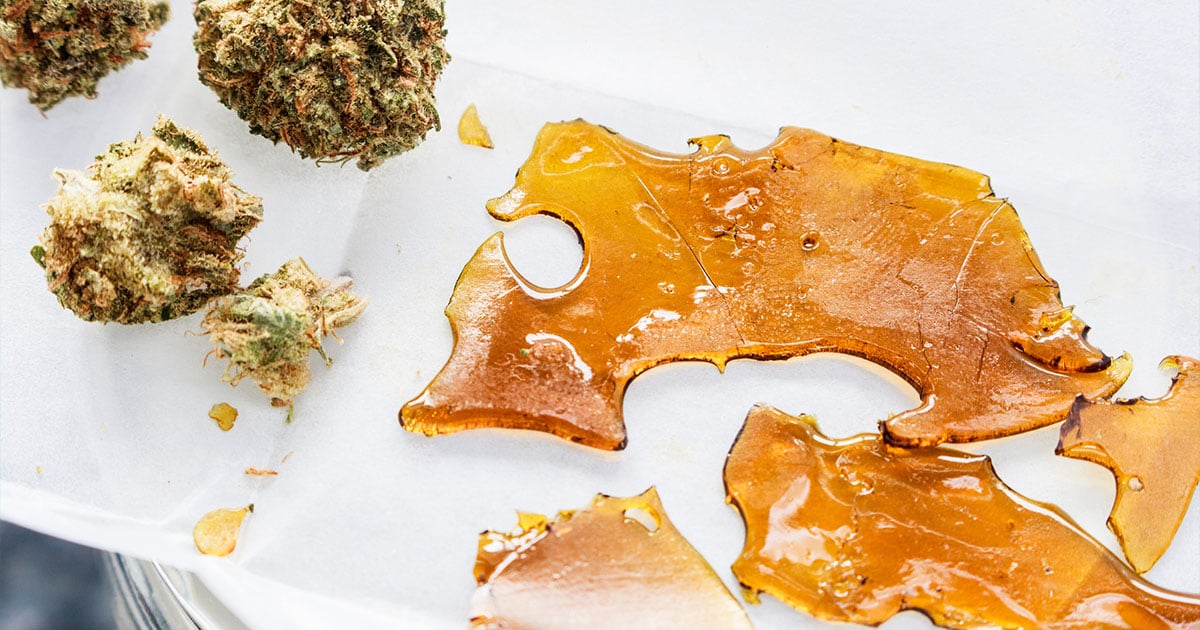 Where Did Cured Resin Originate?

Fresh cannabis plants have undergone a drying and curing process for millennia for medicinal, spiritual, and recreational purposes. Traditionally, cannabis plants were rubbed by hand to remove the trichome resin. Closed-loop technology has made the cannabis extraction process speedier and more effective. Closed-loop equipment and various solvents can be used to remove the resin from high volumes of biomass.

Cured resin varies in appearance depending on its genetics and production process. Solventless production methods can produce a fine dust of trichomes, known as kief, or sticky and wax-like rosin. Solventless cured resin may have a slightly darker golden or brown color than solvent-based extracts due to higher plant matter in the concentrate or effects of oxidation, as seen in hash.

Solvent-based production methods can create a broader range of cured resin varieties than solventless methods. Cannabis concentrate products produced range from liquid distillate to brittle and glass-like shatter. Other variations include the creamy budder extract or the crumbly crumble wax. Cured resin’s color can range from a light golden yellow to a rich amber brown. With CRC technology, extracts can take on a much lighter color.

What Is the Difference Between Cured Resin and Other Concentrates?

Cured resin is made with mature and flowering cannabis plants. After the cannabis plant is harvested, farmers perform a drying and curing process to remove harmful bacteria and reduce the risk of mold, mildew, and rot. After weeks- or months-long process, the aroma and flavor of the cured flower are more refined and palatable than uncured buds.

What Is the Cannabis Drying Process?

The cannabis drying process can take days or weeks to reach an optimal moisture level. Drying usually occurs in a climate-controlled environment with temperatures ranging from 65º to 75º F and up to 55% relative humidity. Commercial growers may use HVAC systems, humidifiers, and dehumidifiers to maintain an optimal temperature and humidity.

What Is the Cannabis Curing Process?

After the drying process, the cannabis curing stage involves storing the dried cannabis flower buds in an airtight and UV-protected container to retain the plant’s terpenes and moisture. The containers may be opened once or several times a day to remove excess moisture and stale air during the process.

What Is Cured Resin Extraction?

Solvent-based extractions use a solvent in a closed-loop extractor to strip the plant’s cannabinoids and terpenes without unwanted compounds like its harsh-tasting chlorophyll, lipids, waxes, and fats. Solvents used include ethanol, CO2, and butane. The extract then undergoes a refinement process to remove the solvent from the final product.

What Is a Cured Resin Cartridge? 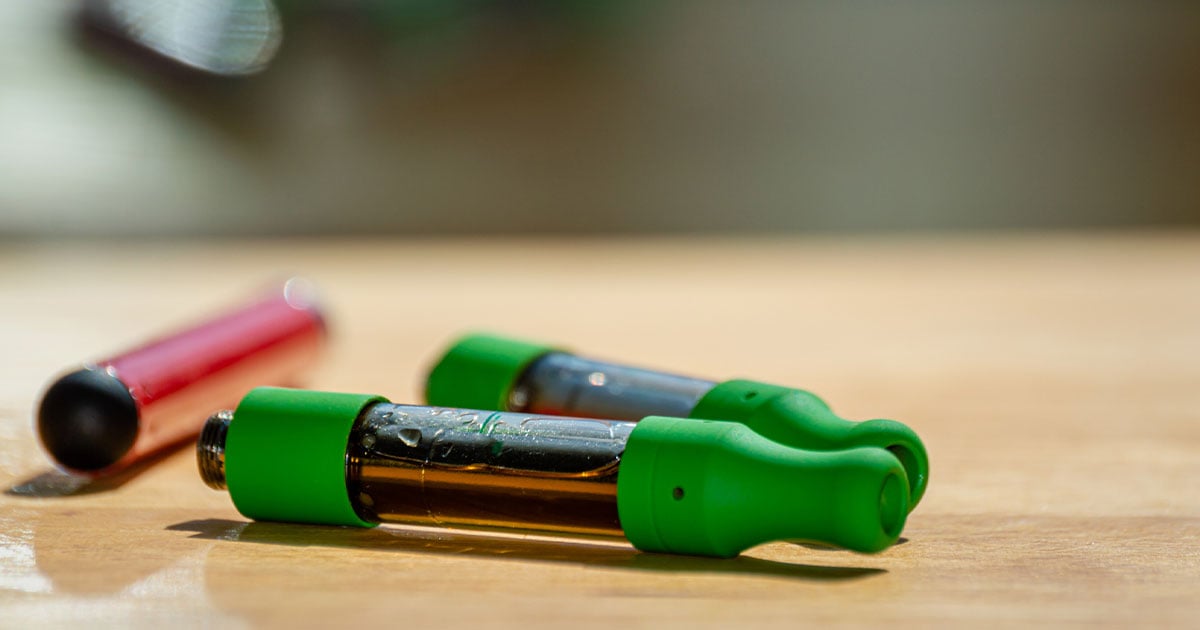 Cured resin vape cartridges connect to a battery that powers the vaporizer's heating device. Cured resin cartridges can contain a high-THC or CBD oil diluted with a thinning agent such as terpenes, making the concentrate easier to vaporize in the vape pen. Simply screw the cartridge into the battery and you are ready to vape the plant’s original flavor profile.

How Is Cured Resin Used?

Each product has a distinct production process, but the general process involves binding the cannabis extract to an oil or fat. For instance, edibles are created using cannabis-infused butter or cooking oil. Topicals are derived from cannabis and beeswax, coconut oil, shea butter, and other wax bases.

Cured resin can be smoked on top of or mixed into a packed bong or pipe bowl. It can also be integrated into joints or coat the outside of joints for added potency. Concentrates can be vaporized or dabbed in a portable vaporizer or dab rig/e-nail, respectively.

How Do You Store Cured Resin?

All cannabis concentrates, including cured resin, should be stored in a dark, dry, and cool location. Cured resin can be stored on parchment paper or silicone, plastic, or glass jars, depending on its consistency and your storage needs. Keeping cured resin in the refrigerator or freezer can extend its longevity.

Where Did Live Resin Originate?

Live resin was created in 2013 by cannabis grower William “Kind Bill” Fenger and EmoTek Labs founder Jason “Giddy Up” Emo. Kind Bill had the idea of using freshly harvested cannabis instead of dried and cured buds for years, but could not find the right equipment until he installed a closed-loop extractor from EmoTek Labs.

Live resin has a runny consistency than its stickier cured resin variety. Live resin’s higher concentration of terpenes contributes to its oilier consistency. This high-terpene extract usually has a golden yellow color.

What Is the Difference Between Live Resin and Other Concentrates?

Live resin differs from other concentrates in its post-harvest process. Harvested cannabis flower buds are flash-frozen immediately so that the cannabis plant retains more of its trichomes. Live resin contains a higher percentage of terpenes than most concentrates, except for high-terpene full-spectrum extracts (HTFSE) like terp sauce.

Live resin extraction starts with fresh-frozen cannabis plant material. Many processors use light hydrocarbon extraction with solvents like butane and propane to preserve the plant’s terpenes. During the extraction process, the solvents remove the dissolved cannabis trichomes, including many of its terpenes, to retain the valuable terpene profile of the cannabis strain.

Live resin extraction happens at relatively low temperatures to reduce the risk of destroying the volatile terpenes and the number of residual solvents in the crude extract. After the resin has been extracted, the concentrate is placed in a vacuum chamber to evaporate its residual solvents. Some states have specific and safe cut-off levels for residual solvents.

What Is a Live Resin Cartridge?

A live resin cartridge is a pre-filled vape cartridge with live resin. Live resin uses terpenes, instead of other thinning agents and flavorings, to add flavor to the oil and make it easier for the heating unit to vaporize the extract.

How Is Live Resin Used?

Live resin is generally vaped or dabbed in a vaporizer or dab rig/e-nail, respectively. Live resin can be found in vape cartridges and disposable pens. Live resin can also be used as a base for edibles and topicals, although it is rare since most users prefer inhalation methods to experience the product’s premium flavor and aroma. 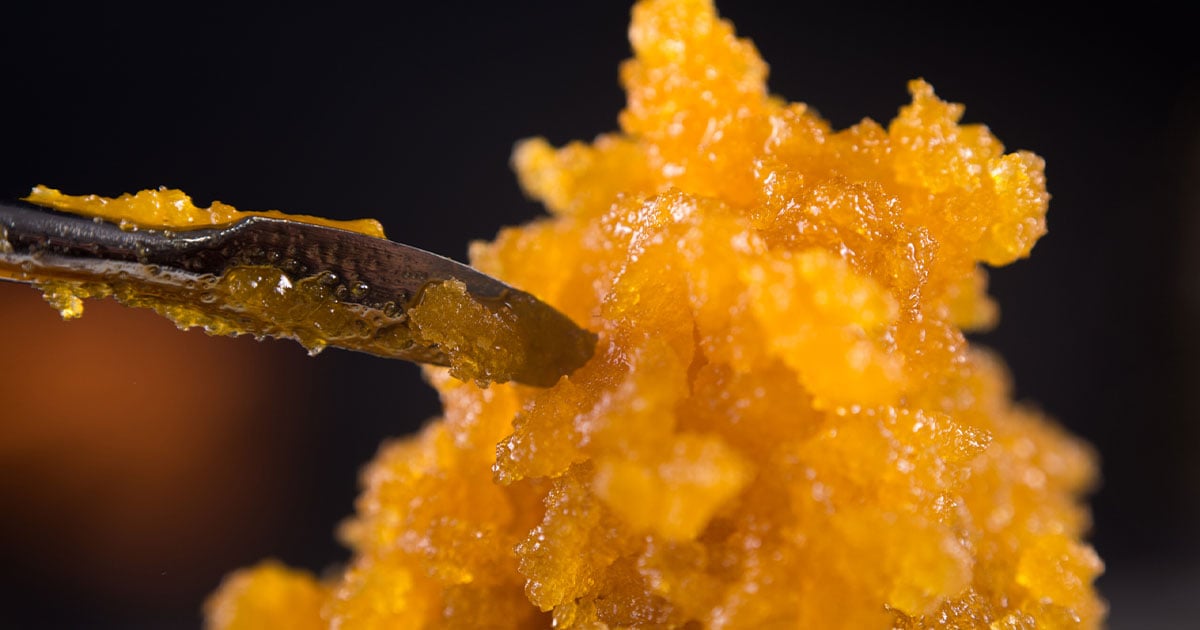 How Do You Store Live Resin?

Just like with cured resin, live resin should be stored in a dark, dry, and cool place. Live resin, in particular, is more prone to degradation due to its higher terpene levels. Terpenes are heat-sensitive compounds and can degrade when exposed to light or heat, affecting the product’s aroma, flavor, and experience.

Live resin can be stored in an airtight container made of silicone or glass away from light or heat sources. Cool locations like a refrigerator or freezer can help preserve the quality of the live resin for more extended periods. The product may need to “thaw” out when taken out from the freezer for use.

Why Is Live Resin More Expensive?

Live resin is sold at more premium prices than most cannabis plant extracts due to the complex extraction process it must go through. Processors require more labor and skill to handle the fresh plant material and preserve the valuable terpene profile. In the end, the live resin cost can be a great value if you are a cannabis connoisseur that prefers complex flavors and aromas.

Live Resin vs. Cured Resin: Which One Is Right For You?

Cured and live resin both offer tremendous therapeutic benefits, although live resin contains a higher concentration of the cannabis plant terpenes. Cured resin can be a great starting point for most users, but live resin can offer added health benefits due to its terpenes. Ultimately, it all can boil down to the cost-effectiveness of either extract. How big is your budget and how important are terpenes?