Cannabis Distillate: Behind the Making of Pure & Potent Liquid Gold

Cannabis distillates are the ultra-refined extracts from the cannabis plant found in vape cartridges, edibles, and topical products worldwide. Distillates contain a single cannabinoid in pure and potent oil. Their amber-colored and translucent appearance does not start off that way. A series of extraction and purification processes convert the raw cannabis and hemp plant material into the marijuana distillate found in a significant amount of cannabinoid-based products.

What Is Cannabis Distillate? 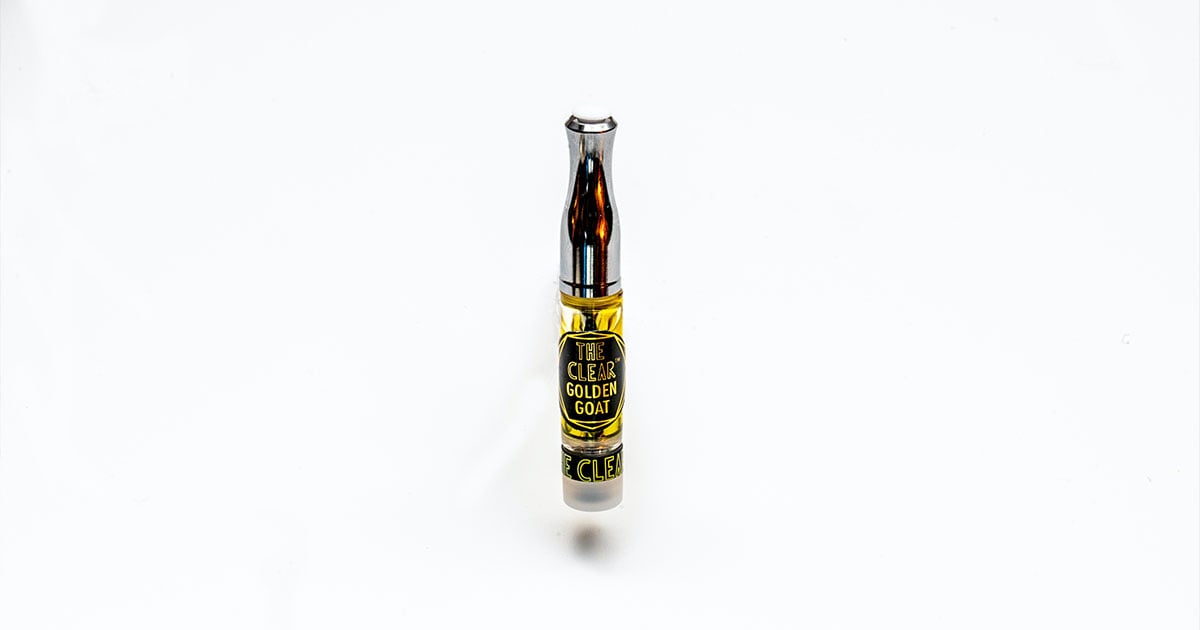 Cannabis and hemp are composed of hundreds of individual compounds including cannabinoids, terpenes, flavonoids, and other essential oils. In the end product, boiling techniques remove nearly all of the flavor and aroma that comes from the plant's terpenes. While terpenes are believed to elevate cannabinoids’ therapeutic potential, they are not always welcome.

Since all of the wax, lipid, and undesirable plant matter is removed from the extract, distillates take on a translucent look. Its viscous and sticky consistency contains a nearly pure potency reaching up to 98% cannabinoids compared to the slightly lower levels (60 to 80%) of undistilled extracts.

Cannabidiol (CBD) offers a more subdued and non-intoxicating alternative to the cerebral effects of THC. CBD distillate contains no THC and a nearly pure concentration of CBD. CBD distillate is a powerful extract meant to reap all of cannabis’ and hemp’s wellness benefits without the high. CBD has been shown to help treat seizures, inflammation, pain, nausea, depression, anxiety, and migraines.

Cannabis terpenes are responsible for the unique aroma of each cannabis plant strain. While terpenes are found in minor levels in the cannabis plant compared to cannabinoids, they offer a robust aroma that can fill a room. Flavonoids are found in even lesser amounts and are responsible for the colors in your buds. Removing these compounds helps processors produce a uniform extract that can be flavored afterward.

What Is the Difference Between Distillate, Oil, and Isolate?

Cannabis oil goes by so many names, it is hard to keep track. Cannabis distillate always takes on a viscous oil consistency. It is a type of cannabis oil, but not all cannabis oils are distillates. The term distillate is reserved for oils that have undergone a distillation process after the oil has been extracted, winterized, and decarboxylated. Cannabis oils such as live resin, butane hash oil (BHO), Rick Simpson Oil (RSO), or hemp-derived CBD oil are similar but not the same.

Many people confuse distillate and isolate since they both focus on a single cannabinoid. In fact, isolate is technically a type of distillate since distillation techniques are used to refine the cannabinoid extract. Cannabinoid isolates, however, are completely pure crystalline powder forms of the therapeutic compound. Think of distillate as a less refined but equally powerful extract that elicits potent effects.

How Is Distillate Made?

Making cannabis distillate starts with a cannabis or hemp seed and undergoes a range of cultivation, extraction, and post-processing steps to remove the cannabinoids, terpenes, and flavonoids from the biomass (flowers, leaves, and stems). Here is a complete rundown of the supply chain and process used to distill the most valuable cannabis compounds.

Even before the distillation process is initiated, the cannabis plant must undergo multiple steps including being properly dried and cured after harvest. Once dried, the biomass can be extracted using a range of solvents including carbon dioxide, butane, and ethanol. The biomass is packed in a material column, drenched in the solvent, and may be further refined using color remediation techniques before ending up in the collection tank.

Some processors may perform a winterization on their extracts to remove fats and waxes using ethanol and cold temperatures. In addition, the extract may be decarboxylated to activate the acidic cannabinoids, such as THCA and CBDA, into their parent compounds: CBD and THC.

In the end, crude oil derived from the initial cannabis extraction process contains a THC or CBD concentration between 60 and 80%. The rest of the oil will be composed of different flavors and aromas (terpenes), vitamins, antioxidants, and other essential oils. After the extraction process, the oil needs to be further purified to become a distillate.

Through steam distillation and fractionation techniques, distillation equipment can remove the ethanol, carbon dioxide, or butane solvent and almost everything else besides the cannabinoid through multiple passes.

Generally, the short exposure to heat during the process reduces the risk of degrading the highly volatile cannabis compounds. In addition, the best equipment creates a thin film of the oil onto the evaporative surface for more uniform heating and evaporation. Compounds with higher boiling points usually fall downward with the force of gravity and agitation into a separate residual collection vessel. 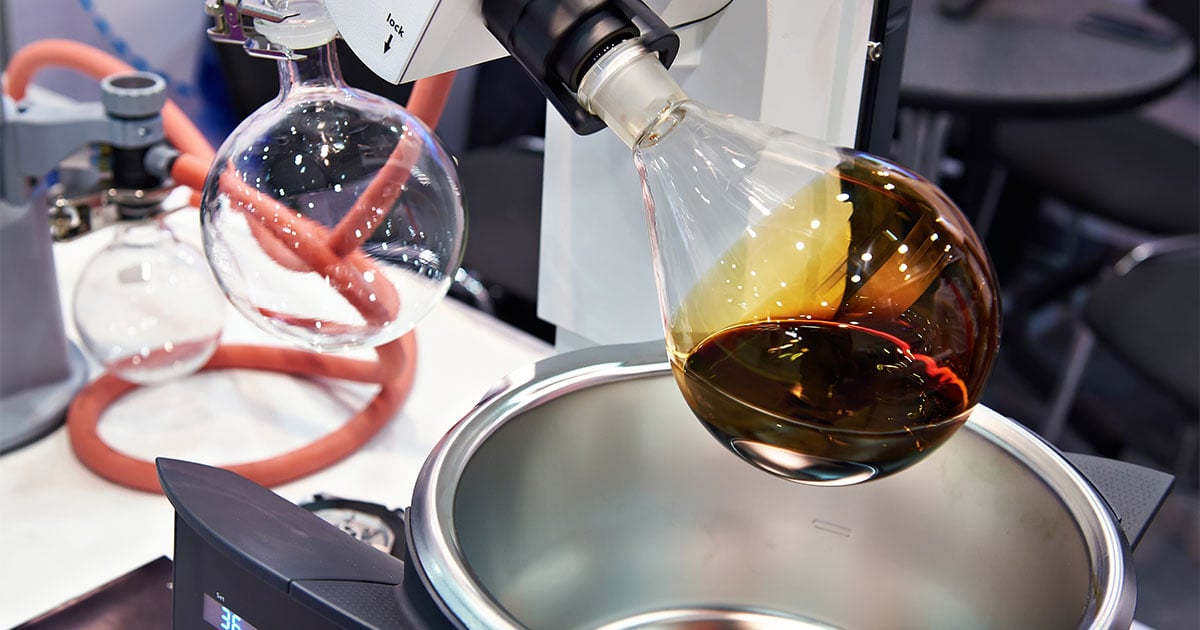 Cannabis distillation equipment ranges from small units for small-batch operators to industrial-scale models for larger operations. Running the crude extract through the equipment multiple times helps remove as much of the plant matter, terpenes, and flavonoids as possible. The first “pass” removes volatile solvents, gases, and water while additional passes remove terpenes and flavonoids from the final product.

Short path distillation uses slow thermal heating to heat crude oil in a glass flask with a magnetic stirrer. As the temperature slowly rises, extractors can separate fractions of the distillate beginning with the terpenes and solvent. Each fraction is collected in a collection flask. There are usually three, one for terpenes and highly volatile compounds, another for CBD or THC, and the last one for cannabinoids with high boiling points.

Wiped film distillation is a type of short path distillation. Under a vacuum, the cannabis oil is loaded onto a heated and rotating vertical cylinder. Wipers continuously wipe the extract creating a thin film on the evaporative surface. A chilled condenser in the center of the wipers condenses the THC or CBD vapor. Different collection vessels collect the CBD or THC distillate and any heavier compounds such as chlorophyll, wax, and salts below.

Rotary evaporation techniques use rotary evaporators, also known as roto-vaps, are common in the removal of the solvent from the final product. In a rotary evaporator, the pressure drops using a vacuum pump which reduces the boiling point of the solvent. A rotating distilling flask is filled halfway and heated using a water bath. The distillation flask is rotated creating a thin film of the cannabis concentrate. This increases its surface area to speed up the evaporation rate.

Falling film evaporators include an evaporator and condenser and use a different boiling point to separate compounds from the cannabis concentrates. Using this method, the oil is drained from above into a heated column and falls downward creating a thin film on the evaporative surface. As the cannabinoids evaporate, they are collected on a chilled condenser. Due to its unique methodology, cannabinoid products with lower viscosity work well under this process.

How to Use Cannabis Distillates

THC and CBD distillate can be used in a variety of ways for medicinal and recreational consumption. Its versatility makes it a favorite among extraction companies and consumers. Smoke it, vape it, cook with it, or make soothing lotions and creams infused with THC or CBD. The possibilities are endless. Cannabis distillate can be found in a majority of products sold in retail shops today.

Cannabis concentrates such as distillates are commonly consumed, or dabbed, with a glass dab rig or electronic nail (e-nail). Dab rigs and e-nails are great for use at home since they can deliver large doses using heated surfaces. E-nails, in particular, can maintain consistent temperatures using a digital controller and power source to perfectly vaporize cannabis oil. E-nails offer the convenience of not having to use a torch and estimate your heat up and cool down times for your nail.

While dabbing distillates is the recommended method of consumption for sky-high potencies, many users may also smoke their distillates to enhance the potency of their dried cannabis flower. Simply add a tiny dollop of your cannabis oil on top of a packed bowl or within/outside your joint for an enhanced effect. 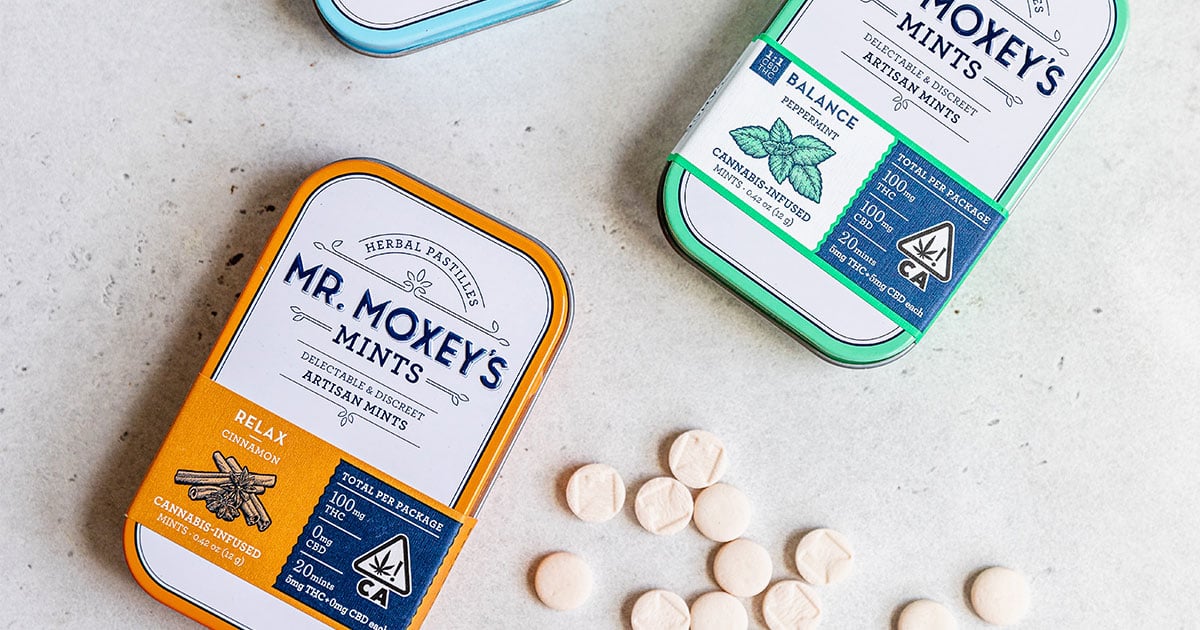 Cannabis distillates are a favorite ingredient in the making of edible products. Distillates can be infused into your favorite foods or beverages. Add this already decarboxylated oil directly onto your finished meal or use it as an ingredient as you cook. A distillate’s flavorless and odorless form allows you to create edible products that do not have the tell-tale taste and smell of the cannabis plant.

In addition, you can consume distillate sublingually for faster absorption and onset of effects compared to ingestion. It is recommended to bind the distillate to a carrier fat such as coconut oil, MCT oil, butter or other food-grade oil for better absorption since THC cannabinoids bind to fat. While the extract is already decarboxylated, it still needs help absorbing into the mucous membranes under the tongue. Warm up the mixture, stir until it is dissolved, and it is ready to go.

No matter what cannabinoid distillate you buy or produce, you can infuse it into a variety of topical products including lotions, creams, and salves. Recipes require cannabis distillates and a carrier oil such as coconut oil along with your favorite essential oils for aroma. The salve infused with cannabinoids can be applied directly to the affected area for localized relief without the high since the cannabinoids cannot reach the blood-brain barrier.

Why is Distillation Important?

Through distillation, operators can purchase a greater volume of marijuana trim or low-quality biomass and distill their desired compounds into an ultra-potent liquid.

Distillates have become the backbone of the marijuana derivatives market. Find them in nearly every product category. Their flavorless and scentless characteristics help create a consistent and repeatable cannabinoid product.

Those infused gummies and chocolates we all know and love are only possible with a foundation of distillates. And, if you are a fan of aromatic terpene compounds, they can be reintroduced back into the final product.

High-quality THC and CBD distillate require an efficient extraction stage to remove as much of the cannabinoids from the cannabis plant. Luna Technologies’ automated extraction system, the IO Extractor, provides processors with a peer-reviewed hydrocarbon solution. Produce clean and pure marijuana distillates from any quality cannabis or hemp biomass using the power of hydrocarbons and automation.