How Do Terpenes Affect the Human Body?

Cannabis-derived terpenes are one of the most in-demand compounds in the industry. For a long time, cannabinoids (THC and CBD) drove market demand and research focus, but now terpenes are gaining traction as potentially therapeutic complements to cannabinoids.

What Are Cannabis Terpenes? 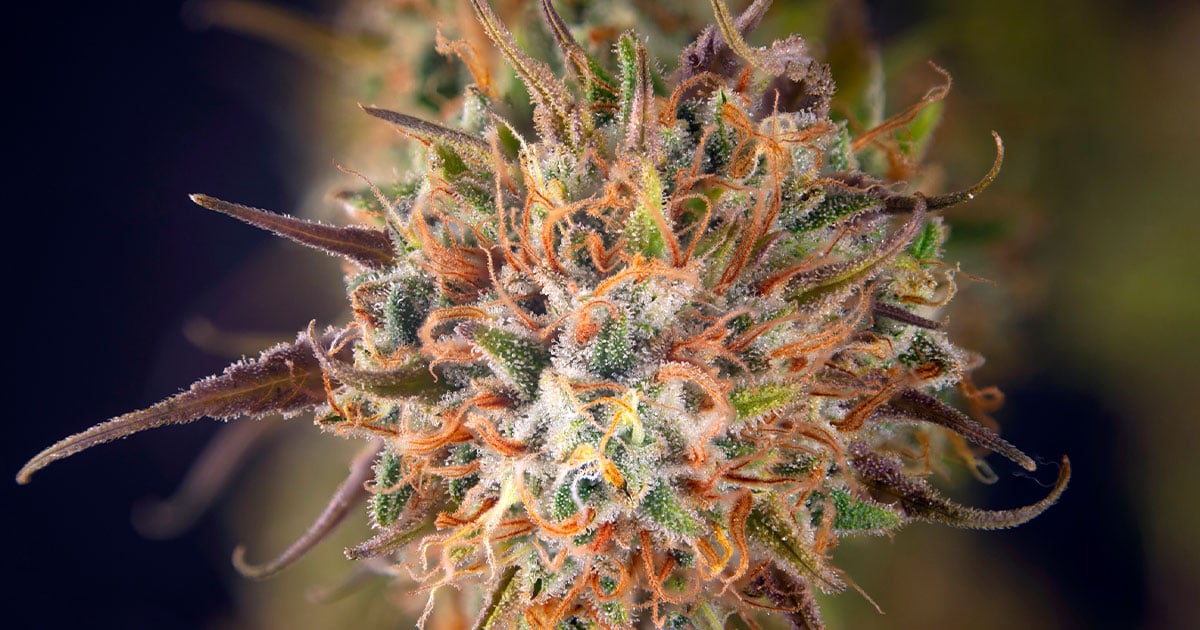 Terpenes are natural aromatic compounds that have been used for centuries for their medical properties. Terpenes are produced in various plants, herbs, and spices and give them their unique aroma. These aromatic chemical compounds are used in medicine and the fragrance industry.

In the wild, terpenes can deter predators, pathogens, and competitors. It also functions by attracting pollinators. Scientific evidence suggests that terpenes may also aid in cannabis-mediated relief. In short, terpenes found in cannabis can enhance the therapeutic effects of cannabis while reducing its adverse side effects.

In the cannabis plant, terpenes and other cannabis compounds are produced in the trichomes, the tiny resin glands that are primarily found on cannabis buds. Each cannabis strain has varying concentrations of terpenes depending on its genetics and growing environment.

In the cannabis industry, terpenes’ potential benefits and synergistic effects with other cannabinoids such as THC and CBD have increased their marketability to cannabis consumers. However, there is still more research to be done surrounding the health benefits of terpenes.

Are Terpene Effects Pharmacological or Psychological?

A long-standing debate in the efficacy of terpenes in pharmaceutical drugs is whether their multiple effects are pharmacological in nature or psychological. The truth is that the effects of terpenes on the human body result from both mechanisms in the mind and body.

A 2001 review on the therapeutic benefits of cannabis-derived terpenes suggested that terpenes can have various mechanisms of action, including increasing dopamine, serotonin, norepinephrine, and GABA activity in the brain.

While terpenes in plants are abundant, scientific research into them is not and primarily on animal models. Most studies on terpenes have been focused on linalool, commonly found in lavender, and limonene, the hallmark terpene in citrus fruits.

In the limited amount of studies that have been performed on terpenes, its therapeutic properties include:

A major influence on how terpenes affect the body is our perceptions, expectations, and aroma preferences.

In terms of cannabis, its particular odor can bring up a bad trip and negatively influence a person's mood. However, if a recreational user smells the same aroma, they may conjure up feelings of fun and excitement.

A 2004 study studied how perception played a role in how odors affected a person. When participants were exposed to an odor, they were told their therapeutic properties.

For example, if an odor was marked as calming, the participants experienced a lower heart rate and skin conductance.

If the odor was presented as stimulating, then the participant’s heart rate and skin conductance would increase. There was a positive correlation between the initial suggestion and the effect for all odor types, including when no odor was used.

We can infer that there is an element of the placebo effect to varying degrees when it comes to terpene consumption and its therapeutic effects. As a result, the effects of terpenes can vary by individual.

What Is the Endocannabinoid System?

Cannabinoid receptors (CB1 and CB2) can be found throughout our bodies. Aside from regulating homeostasis, the ECS regulates various biological functions, including:

The ECS is mainly active in the body’s immune and nervous systems. However, it affects different parts of the body, including the circulatory system, skeletal system, reproductive system, digestive system, liver, and connective tissues.

A growing body of research shows that consuming the full spectrum of cannabinoid and terpene molecules has far more beneficial effects than consuming cannabinoids alone. This phenomenon, first discovered in 1998 by S. Ben Shabat and Raphael Mechoulam, is known as the entourage effect.

The synergistic interaction between different cannabinoids and terpenes produces an enhanced experience that can reduce the side effects of cannabis compounds such as THC. High-terpene full-spectrum products are increasingly popular among cannabis users.

Some terpenes can improve the absorption of cannabinoids through the skin. Their interaction with the blood-brain barrier can help improve the efficacy of cannabis topicals with terpenes.

How Cannabis Plant Terpenes Interact With the Body 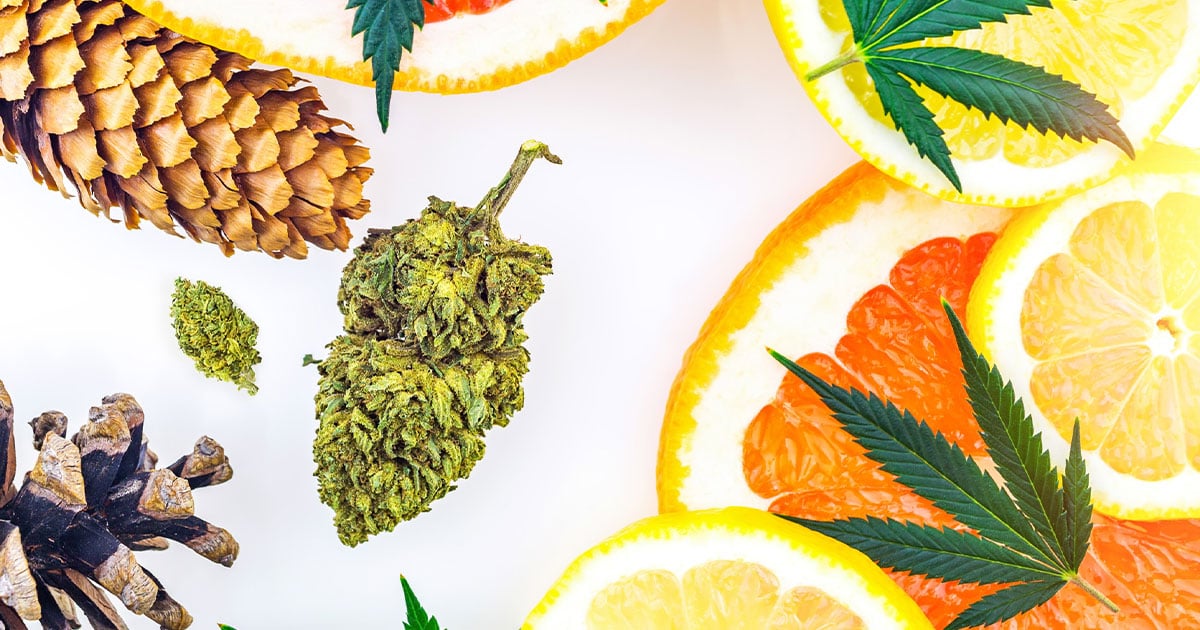 In the plant world, there are over 50,000 terpenes. Only 250 different terpenes have been identified in cannabis plants. These powerful terpenes can affect multiple parts of our body to promote relaxation, relieve chronic pain, and increase the potential benefits of THC and CBD.

Here are a few of the most common cannabis terpenes and their potential pharmacological effects. Keep in mind, most scientific studies on terpenes are based on animal models. Research into how terpenes affect the human body is in its preliminary stages. 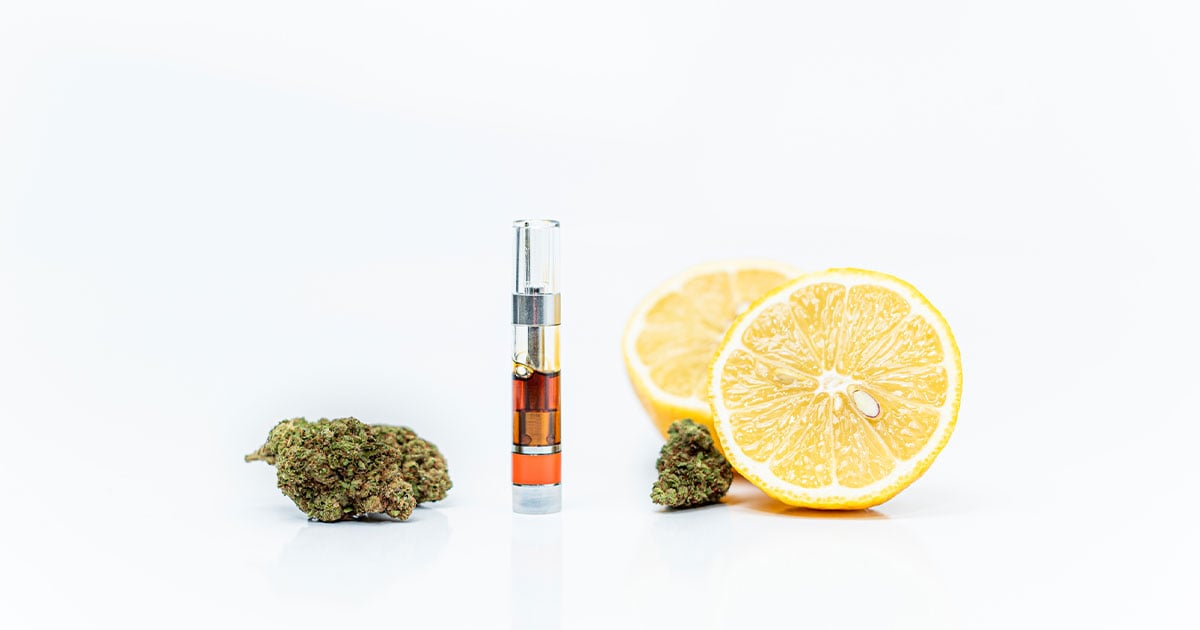 Terpenes consumption dates back to ancient times. Over time, they have retained their popularity as therapeutic molecules. Today, most terpenes are recognized as safe by the U.S. Food and Drug Administration (FDA).

Terpenes are considered strong and volatile aromatic compounds, so only a small amount is needed. Lab testing for terpenes is not common but can provide users with a better idea of what compounds the strain possesses.

In cannabis strains, the average terpene level ranges between 1% and 5%. Cannabis combustion via smoking can degrade many of these heat-sensitive terpenes. Vaporization is one of the most effective ways to preserve the original flavor and aroma of cannabis flower buds and extracts.

The ideal heating temperature for terpenes is lower than heavier cannabinoid compounds. We recommend vaping terpenes between 350º and 400º F. A vaporizer or dab rig with precise temperature controls can help users reap the most out of their buds and extracts.

In vape products such as vape cartridges, terpenes can serve as more than just flavoring but also reduce the viscosity of the extract necessary for heating it in a vape pen.

Sublingual administration of cannabinoids and terpenes is one of the best ways to improve the compounds' bioavailability and avoid the first-pass metabolism that occurs when consuming edibles.

According to the Flavor and Extract Manufacturers Association, the sweet spot for terpene concentration in sublingual applications is 0.01% to 2%. Higher terpene contents can be used for smaller serving sizes and lower frequency of use.

In cannabis-infused beverages, certain terpenes can be infused into water-based products with a food-grade emulsifier since terpenes are hydrophobic. Using an emulsifier can help improve the terpene's bioavailability by protecting vulnerable terpene droplets with a barrier.

Terpenes are commonly found in topicals due to their fragrance and therapeutic benefits, including speeding up wound healing and having antioxidant and anti-inflammatory properties.

With cannabis topicals, terpenes can also improve the absorption of cannabinoids through the skin and enhance the entourage effect.

Too many terpenes, however, can work against their intended relief. In some cases, some terpenes can irritate the skin in high concentrations. Their use in cannabis topicals should be carefully monitored to prevent severe irritation.

In topicals that remain on the skin for an extended period of time, safe concentrations range from 0.1% to 10%. In products that are usually washed off, terpene concentrations can range from 10% to 24%, according to guidelines from the International Fragrance Association. 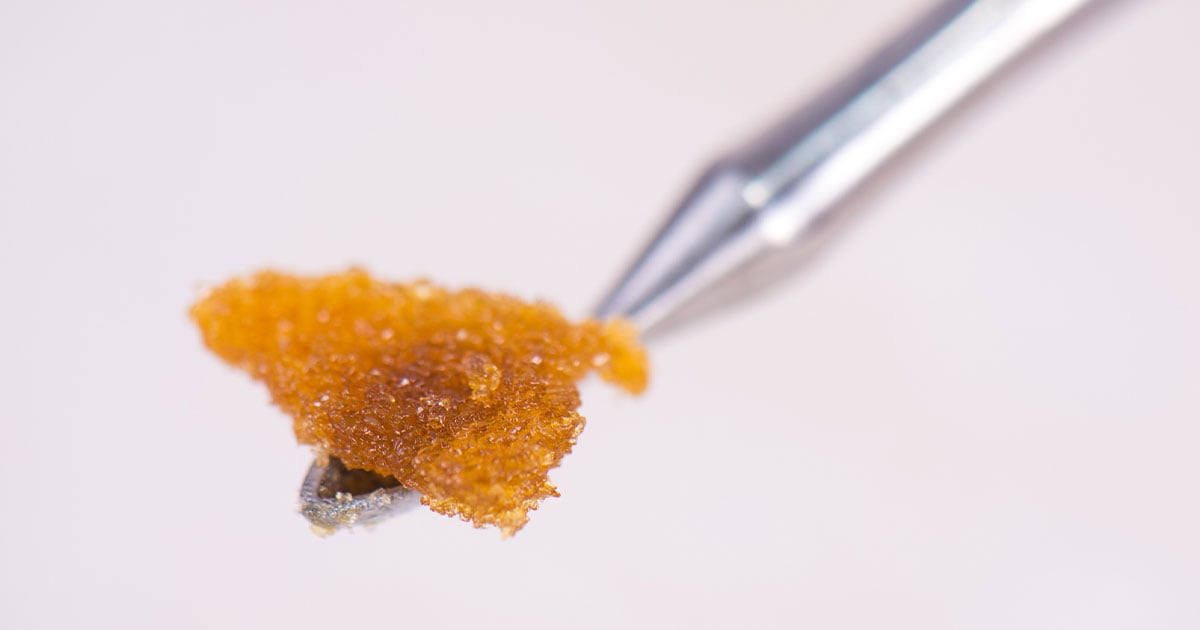 The future of terpene-based medicine depends on technological advancements in cannabis breeding, cultivation, and manufacturing. Automated butane hash oil (BHO) technology like the IO Extractor simplifies terpene preservation during extraction to produce a better flavor, aroma, and experience from the final product.